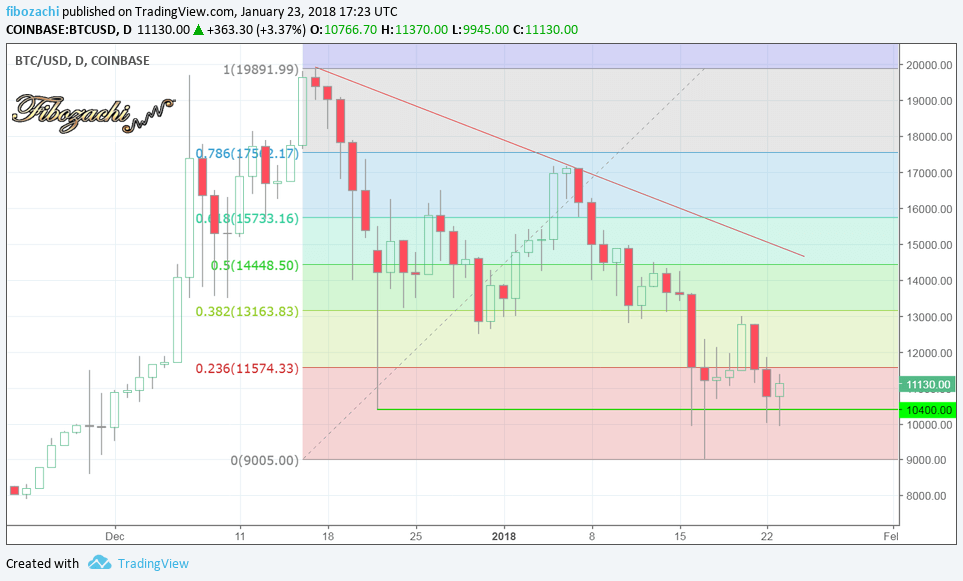 Bitcoin began the 1/23 session with a move down to $9,945 (exactly 50% off the all-time high at $19,891) before recovering and setting up a potential failed new daily low. While the 1/16 and 1/17 sessions saw the price of $BTC plummet from roughly $13,600 to $9,000, both sessions recovered intraday — each ended on strong buying pressure as noted by the long bottom wicks that were plotted (indicative of strong support).

Having chopped around sideways since, BTC may be setting itself up for a bounce back up towards the $13,000 level; where prior support is now likely to provide moderate resistance (note: this is also where the trendline that connects two major swing highs and the 38.2% H-L retracement level is). 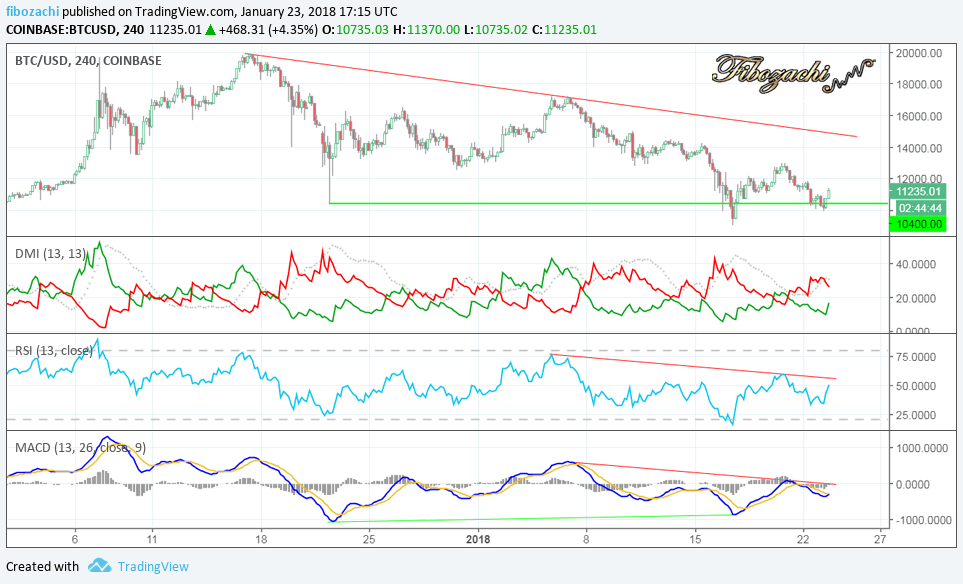 Bitcoin's 240-minute chart shows that both the RSI and MACD are approaching their short-term trendlines. Though a bullish DMI crossover would provide the strongest indication of a potential rally over coming sessions, BTC will likely continue to trade between support at $10,400 and its down trendline that will soon dip below $14,000. From a technical perspective, volatility and price each 'calming' down a bit will be beneficial because that will give credence to chart patterns, indicator readings, and trendline breaks. 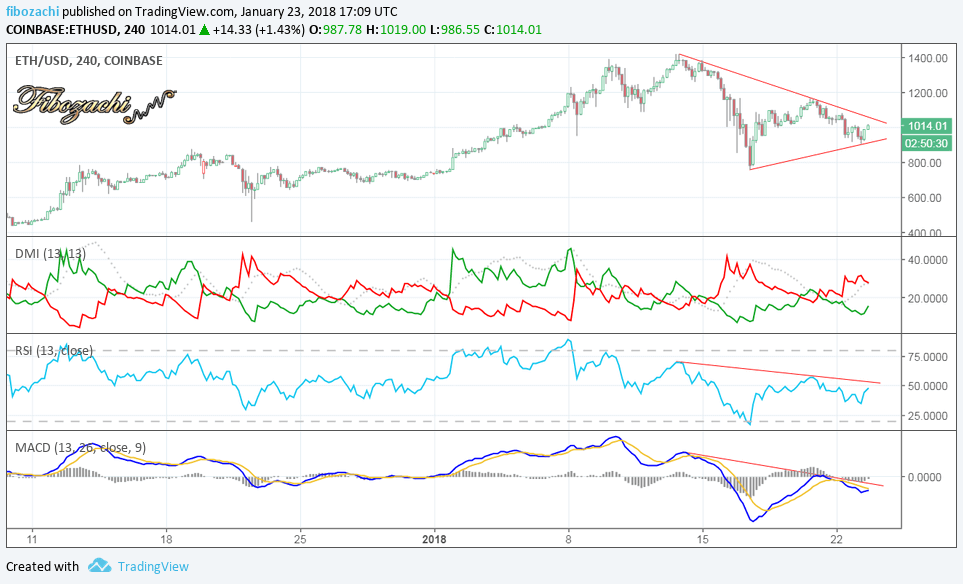 Ethereum has outperformed most of its peers in that it is only down 25-30% from its highs; though price has chopped around sideways in a wedge for the past week. While a daily failed new low is possible, it is still too early to make technical calls off of bullish signals before they actually trigger...

Looking at Ether's RSI and MACD readings shows that both indicators may be turning back up to close and break the trendlines that connect the two previous price/indicator highs. Only once $ETH breaks above both of these trendlines — along with a bullish DMI crossover — will it provide strong evidence of a potential rally.

If ETH breaks above the wedge; a clear-cut target for price action will come into play at $1,160 where there is strong resistance. Conversely, any break below the wedge would likely retest the $800 level, which has been a key price magnet level.

Were price to drop below $800, impenetrable levels of resistance sit at $600-700; which would likely mark a major swing low before kicking off another massive rally (opinion alert: in comparison to other cryptocurrencies, we are especially bullish on Ethereum and do not anticipate that it will drop to these levels, but technical analysis is about possibilities rather than opinions). 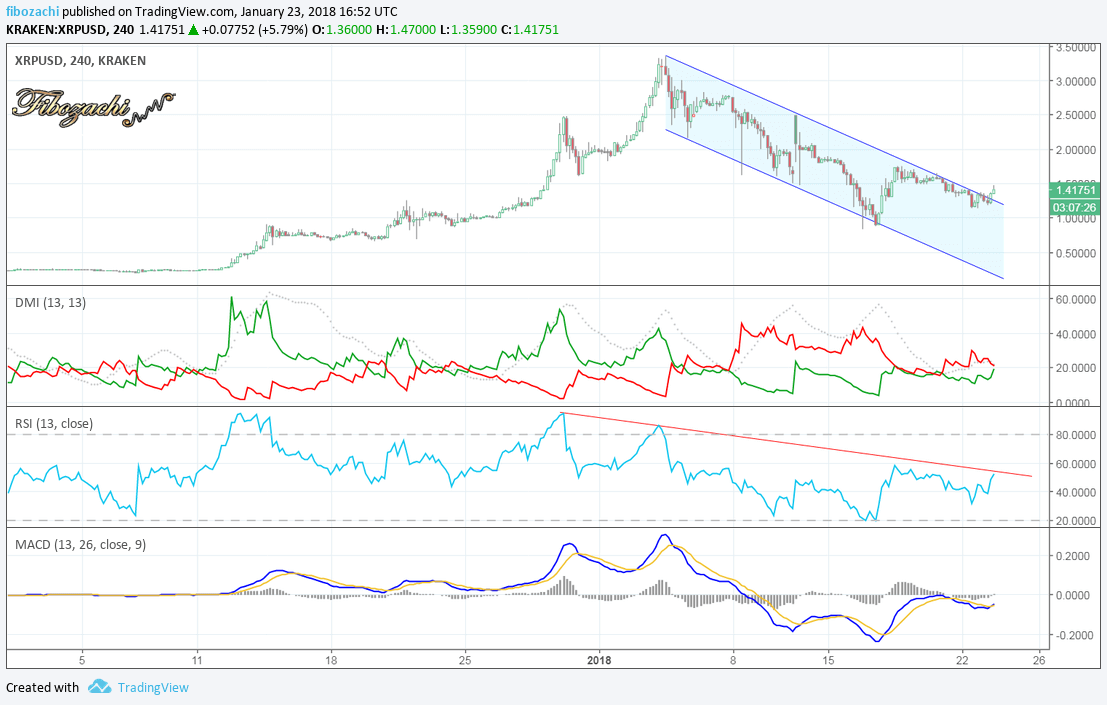 Having traded lower in a near-perfect parallel price channel, Ripple is showing signs of a potential breakout on the 240-minute chart with a possible failed new daily low. If bullish momentum sustains itself over the course of this week, a clear-cut price target of $XRP $1.70-1.75 is what bulls should hone in on.

An RSI break above its trendline at 60+, an MACD crossover and move above 0, and a bullish DMI crossover would provide substantial technical evidence that XRP is gearing up for another move higher. Note: how XRP price action has been riding the top of the parallel price channel for the past several days; this is extremely bullish.

From a purely technical perspective — without any opinion, fundamentals, or sentiment analysis — the possibility exists for a strong multi-day bounce across the entire cryptocurrency marketplace that suckers longs back with in with a circa 20% move higher across the board. The danger here is that there is the Elliott Wave potential for a larger scale downtrend that could bring all cryptocurrencies back down to new swing lows.

From the perspective of a market technician, we would be significantly long cryptos from these levels for a trade (with our finger on the exit button and a trailing stop covering our backside at all times). As price action continues to develop in the days and weeks ahead, charts and only charts will enable technical traders of all stripes to better determine which direction the next 25%+ crypto move will be in.