Facebook sports a bearish technical profile that is similar to AMZN – especially after the last two trading sessions, where Zucks’ Skynet-begetting trust fund failed to exceed the 7/27 all-time high of 175.49.

FB traded up to 174.88 on 10/09 and ended the session with broadly brushed bearish undertones by plotting a doji with a very long upper wick - this signifies how price action attempted to press up onto 175 but was roundly rejected from it before closing much lower. FB’ daily chart also closed 10/09 by plotting a filled white candle. From a purely technical standpoint, this is short-immediate term negative/ bearish.

Though Facebook can (and may very well) rally to a fresh ATH (tomorrow) in just a single solid up session, 10/09’s doji + 10/10’s bearish engulfing candle, at a failed new high = not a good look for bulls.

FB’ bottom line is if Zuckerberg gets a ‘lil news lovin’, then Facenook will:

If FB continues to drift-n-trail lower, then strong support will come into play at 167 and 162. 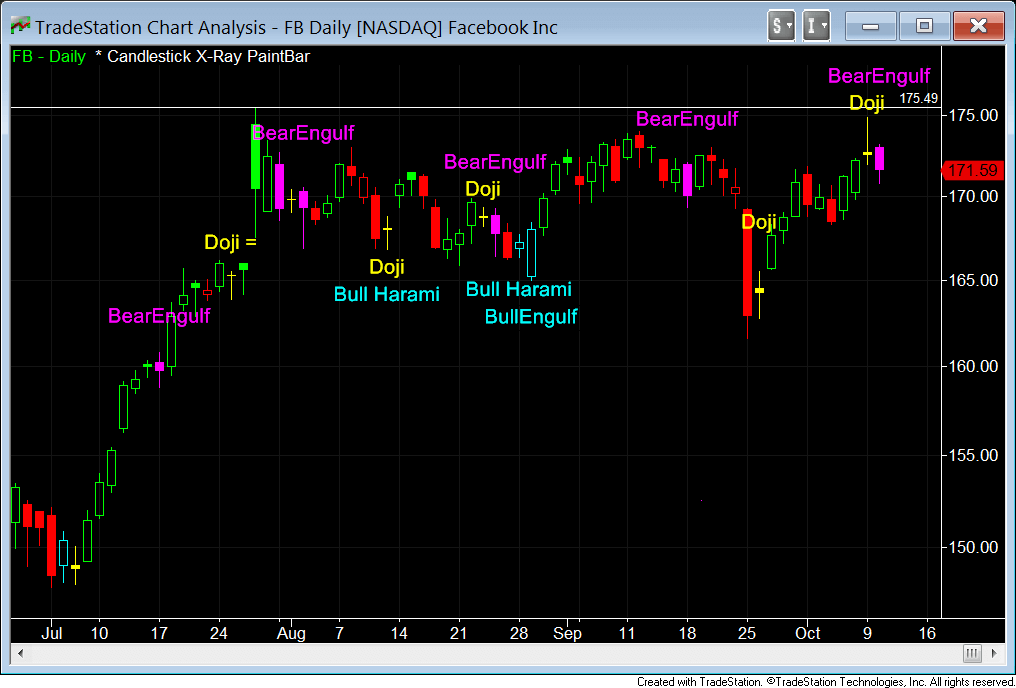 Amazon set a new swing low on September 26th and has since rallied back up towards the previous 9/13 swing high at 1,000.00 exactly.  While the rally may continue, the fly in the bulls ointment is that both 10/9 and 10/10 saw price action’ upward ascent fail at the 998.50 level - while plotting a bearish engulfing daily candlestick pattern.

Even more ominous for AMZN bulls: the daily candle being engulfed is a filled white candle.*

* Filled white candles that occur after strong rallies are especially noteworthy, because they:

Boring as it may be, AMZN’s most likely path is a continuation of chop – bouncing within a sideways price channel that spans 1,000 (strong resistance) and 940 (strong support); as Amazon, the company, continues to decimate each previously-thought-impregnable-industry that it moat-laughingly-island-hops to-like Cris Columbus not ‘discovering’ not-North America. 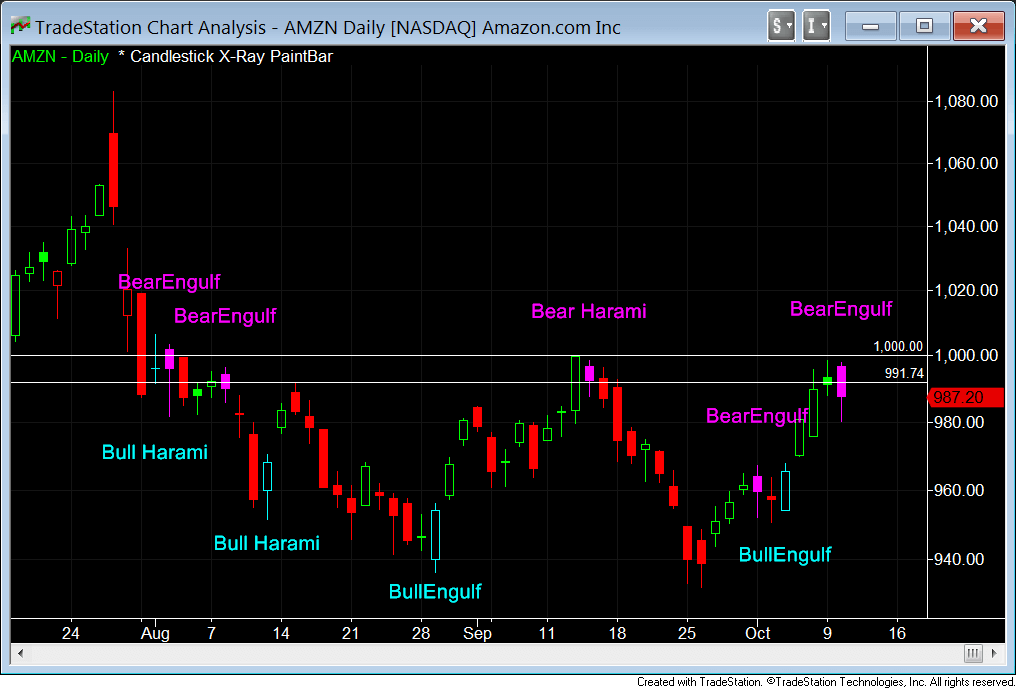 AAPL’s technical profile has the most uncertain outlook of the entire FAANG fam ~ today’s equivalent (and then some) of the Nifty-Fifty. It’s recent price action lacks clear-cut levels of support and resistance.

While snAAPLe’ short-term momentum has been bullish since the 9/25 swing low - and the slope of our Super Stochastics remain pointing upward - the 10/09 and 10/10 sessions suggest bearish potential. Back-to-back daily doji candlestick patterns have plotted, after the one-direction rally from 149.16 up to 158.00 (exactly).

AAPL’s 10/10 daily candle also sports a large wick above and below – it closed just 15 cents lower than the open, while trading across an intraday High-Low range of $2.90. Large doji patterns (even somewhat large ones such as this) often coincide with turning points in price action. Nevertheless, the Cult o’ Cupertino’s larger-degree trend remains unabashedly bullish.

AAPL may simply pause sideways and jog in range for a week or two before catching it’s breath, taking another run at new ATH’s, and sprinting towards 165. 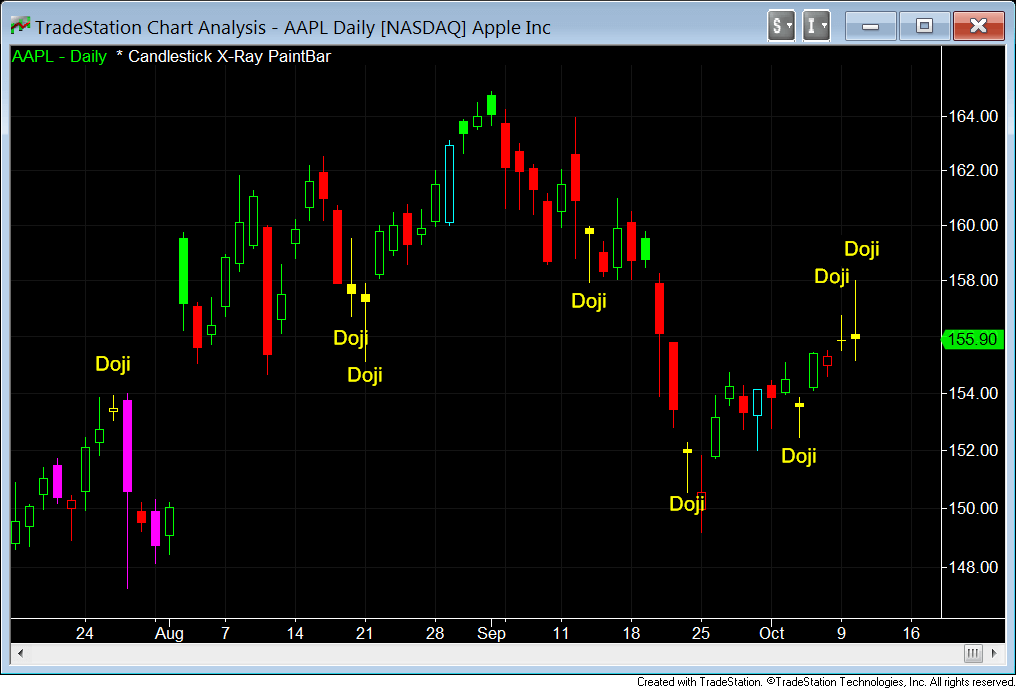 New ATH’s beget more new ATH’s - and NFLX does not have any bearish signal to suggest otherwise. The slope of our Super Stochastics remains pointing straight up, albeit just shy of entering into overbought territory. This suggests that NFLX has yet more upside to come.

Plus, Netflix’ previous swing high (at 191.50) has already flipped - where 191.50 proved to be resistant on the way up, it has morphed from being overhead resistance and now serves as downside support. Price action tested that 191.50 level on 10/10, bounced from and managed to close above it. 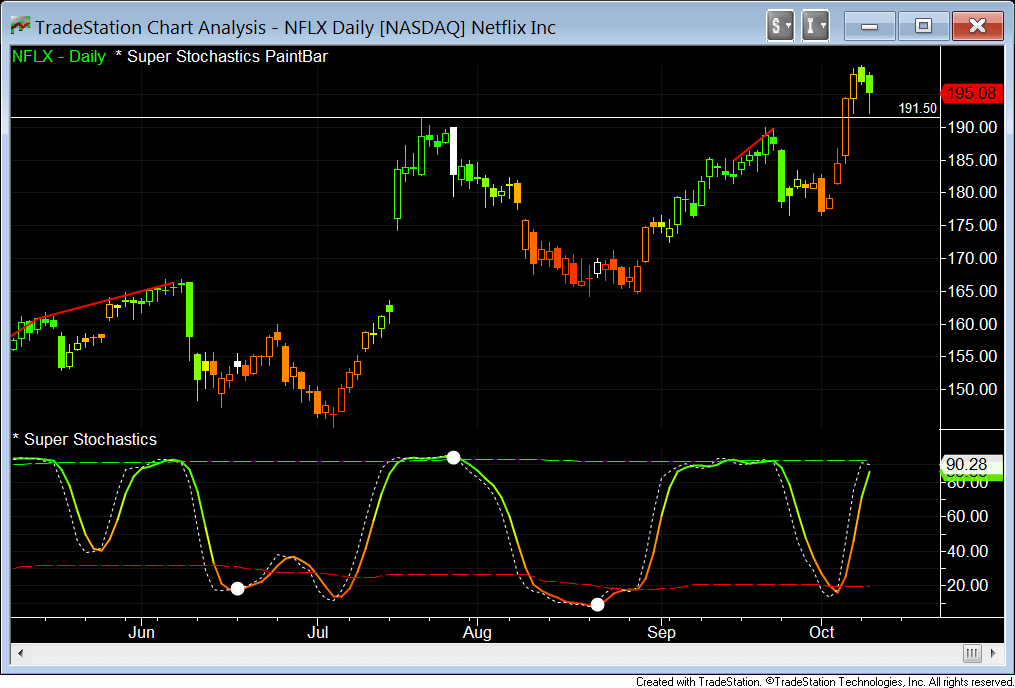 Google has the most bearish technical profile of the entire FAANG cohort. GOOG does not look healthy.

10/09 and 10/10 tell us a similar tale, as Gurgle’ recent rally from 910 failed to push higher when it stalled at 985.42. This 2nd failed attempt to achieve a new high was immediately followed by a bearish engulfing daily candlestick pattern.

We can also see that Google’ Super Stochastics are touching the dynamic overbought level (DOBOS), which adapts its values to recent price action instead of using only fixed values. GOOG’ DOBOS value - above 90 - suggests that it is very overbought.

the reality is that TA allows technicians to probabilize ...

and currently, GOOG is a weak ship afloat a FAANGM sea that is propelled by a terrifically strong Ipanema-beach-esque undercurrent.

What does that mean and what is Do No Evil’s bottom line?

Much like Eric Schmidt’ brand of soft US foreign policy, Google will just keep doing its own thing under the surface while being driven by FAANGM — which is the Uber driver of tech’s collective bubble-liciousness.

Bottom line: if GOOG cannot muster the strength to chop sideways for a week and form a handle from which to baby-vault back up into prior swing highs and over 1k ... then odds will dramatically increase that Google’s 10/9 session could be a long-term top that spans 3+ months if not much longer .. eventually testing the 8/21 swing low of 903.40 and possibly filling the huge open gap at 875. 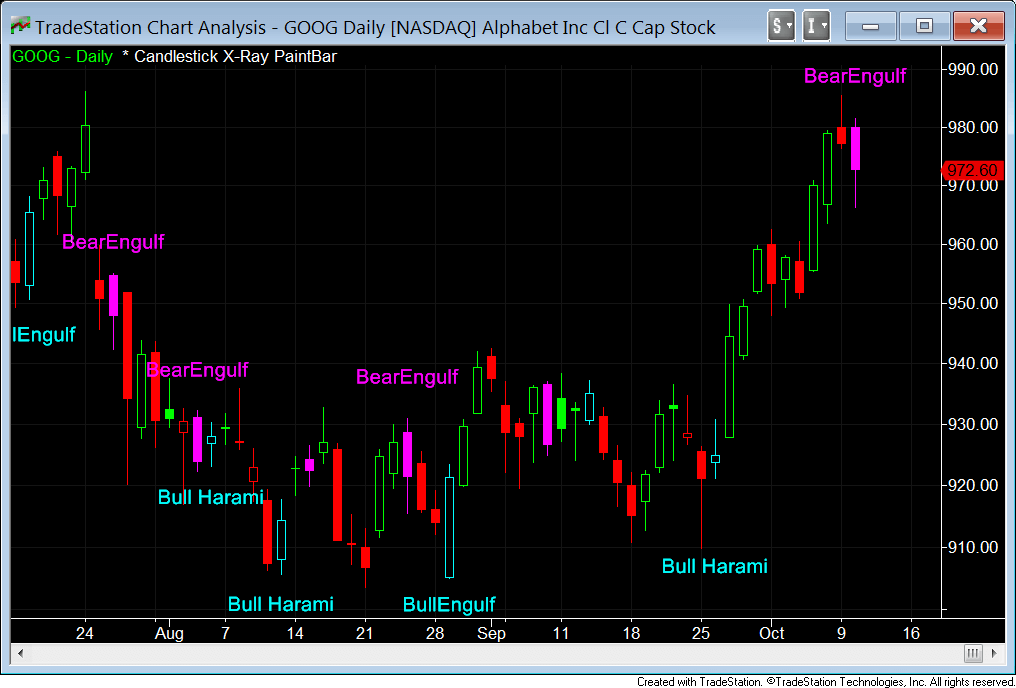 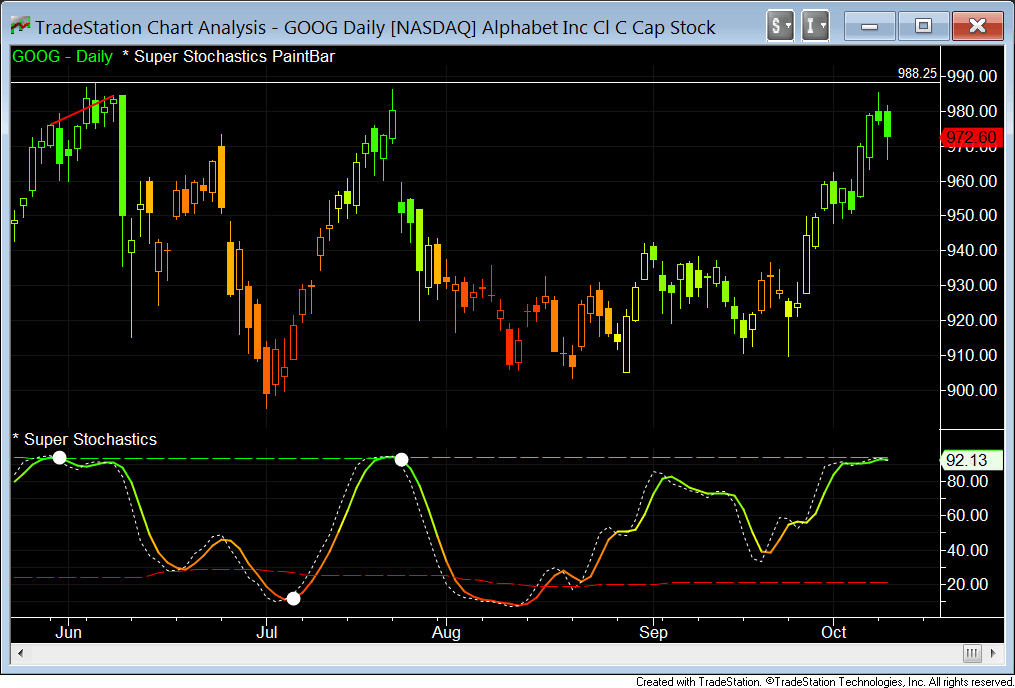