Having notched an all-time high by closing at 97.35 on 10/3, JPM appeared to be consolidating over the next 6 sessions - in preparation for another surge higher. But 10/12’s Q3 earnings release session suggests that immediate bullish momentum may have been exhausted and, with it, Sir Jamie’s next (ever-so-lovable and antithetically Populist) all-time high “I’m richer than you are” quip has been placed in uncertain limbo; akin to PM Jordan’s Bitcoin prop traders.

But being just shy of an all-time high …

and without a confluence of technical signals to suggest a significant inflection ..

pre-emptive calls for a top in price action should be met with a great grain of salt.

Even if you are a PM Jordan bear (for non-technical reasons), you should not position for a substantial price inflection prior to:

JPM’s strongest support (and 1st downside target) surrounds round number 94, where a small open gap remains unfilled. Should JPM slump (and close) below 94, strong support levels will show themselves just above 90 and 88. 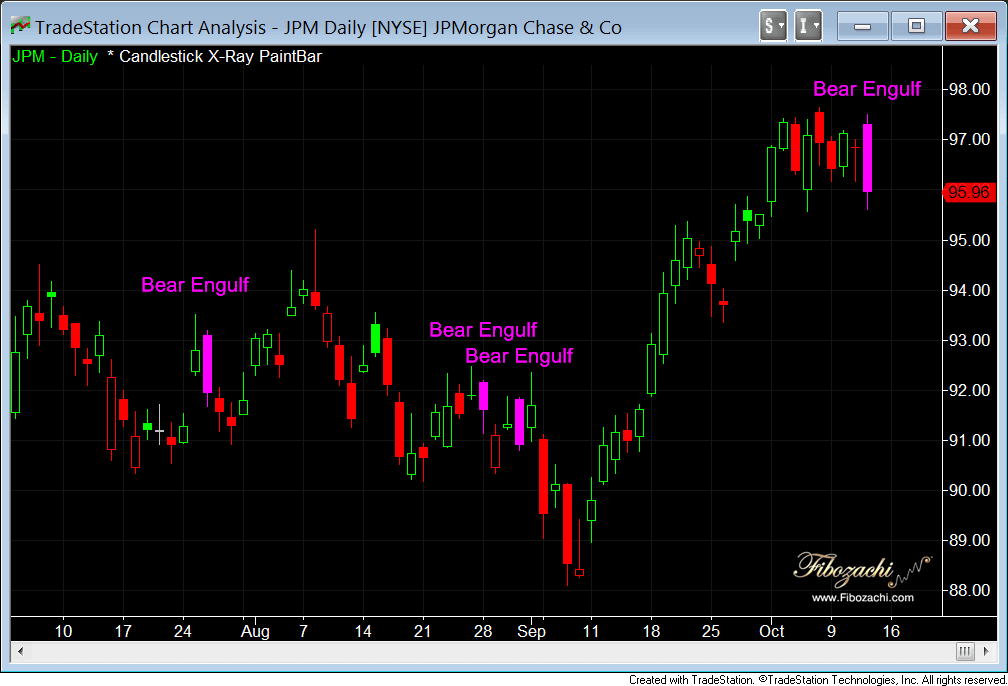 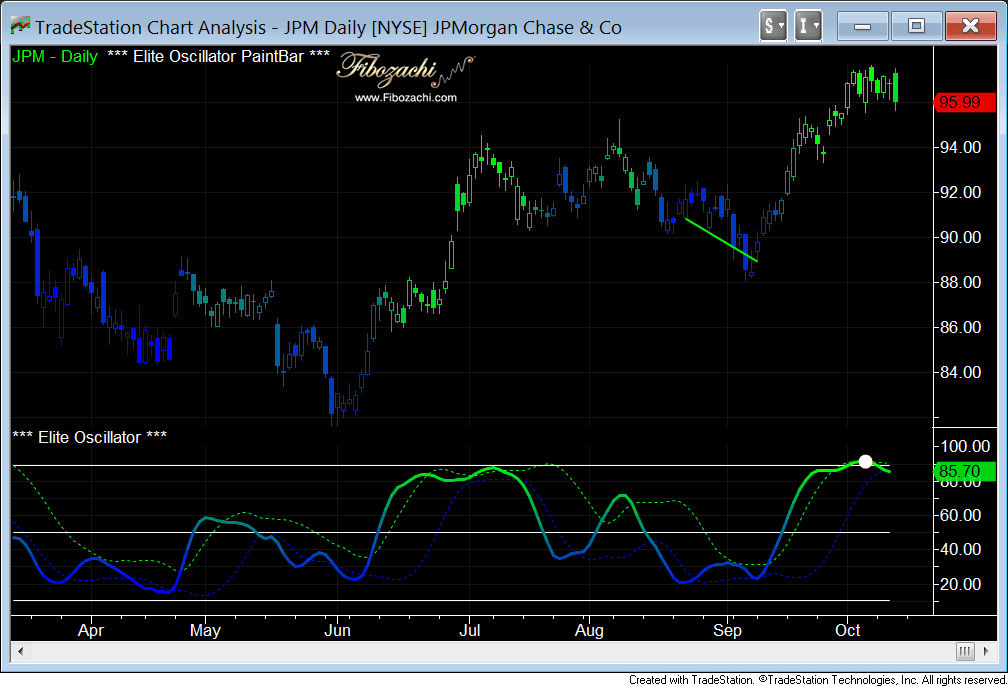 The daily chart of VanEck’ Semiconductor ETF (SMH) clearly (and unmistakably) shows a Super MACD, RSI, and Stochastics that have each zoomed up, up, and away – into dynamic overbought territory. This confluence of technical developments is noteworthy because our Dynamic OB/OS Levels (DOBOS™) adapt to price action, rather than simply remaining static. This results in indicator value levels that often prove much stricter than the pre-set values that your ‘textbook’ suggests (and discount broker pre-populates); i.e. an RSI setting of 70/30, Stochastics at 80/20.

The last time the SMH daily chart exhibited Super MACD, RSI and Stochastics readings with such elevated values (~all swimming deep in overbought waters) was just prior to the 6/8 swing high top. Further still, the last time these 3 Indicators were oversold in unison was at the 4/17 and 7/3 swing low bottoms.

that the Super MACD, RSI, and Stochastics have all drifted into dynamically overbought territory …

while price has paused in place, after a relatively relentless move higher without so much as a single sizable dip) …

ought give Semi bulls good reason to tighten their stops; if not amenable to taking partial position profits here and now (now that their winner has ran, and ran and ran so).

A downside retracement for SMH would pause first around 93; then dead-cat bounce back above 94 ½ before testing round number 90 on the down. Should such a simple ABC downward retrace occur, technicians would be wise to pay particular attention to how price action responds once it dips down into a strong lateral support shelf that spans 89 – 90. 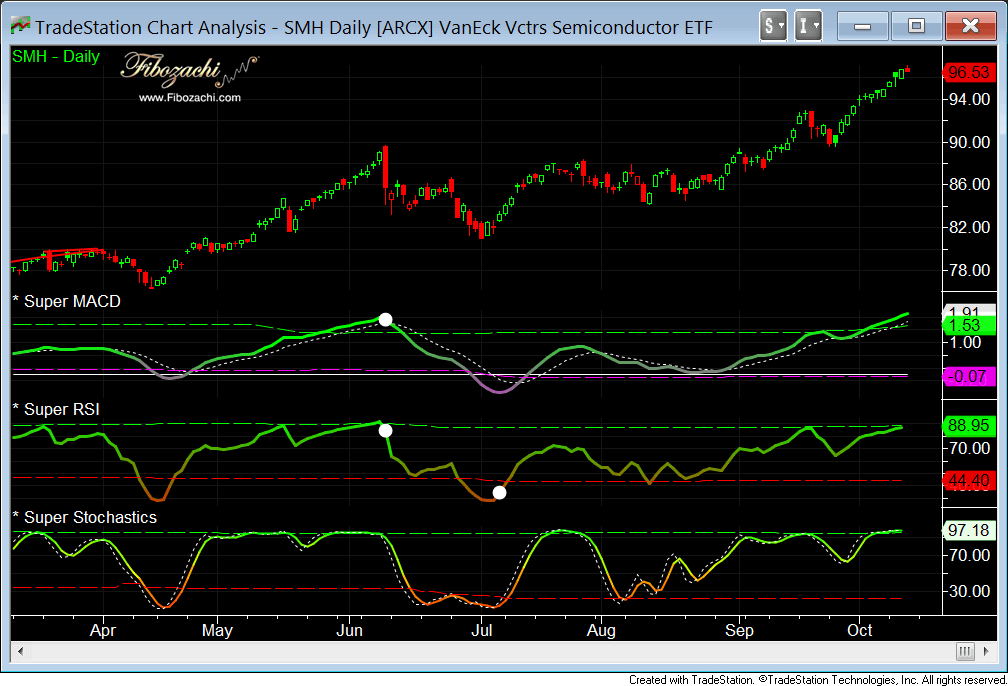 Despite a well-defined penchant for monstrous rallies, Bitcoin’s 60-minute chart shows that it entered into overbought territory on 10/12 on both the Super RSI and Super MACD. Employing Dynamic OB/OS Levels that adapt to price action allows users to determine when price is truly exhausted and likely about to correct or reverse.

The last time that Bitcoin ($BRTI) witnessed the Super RSI and Super MACD above their Dynamic OverBought Levels was back on 9/18 at the $4,112 high – the last hurrah of a swing high, directly before a downward correction that ended four days and -14.4% later at $3,520.

If Bitcoin is ready to take a well-deserved breather, support will not come into play until $4,800. And while a 10% downswing (after a 10% up day!) will not phase those who are HODLing, our central aim as market technicians is to identify and diagnose asymmetric risk:reward technical setups; so that, as traders, we can most effectively execute entries/ exits and efficiently manage those positions.

To wit, a pullback that successfully finds support at and rounds back up from the $4,800 - $4,900 zone (~ the 10/12 breakout zone) would be a fine spot to enter or further build upon an existing position (with a clearly defined stop just above $4,700, that explicitly defines position risk). 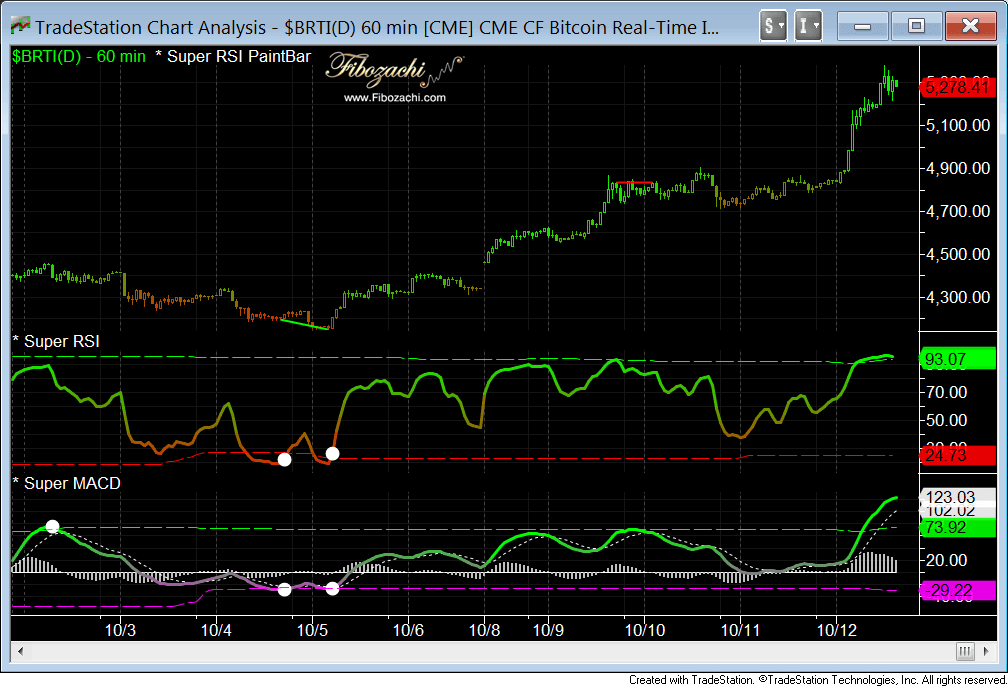 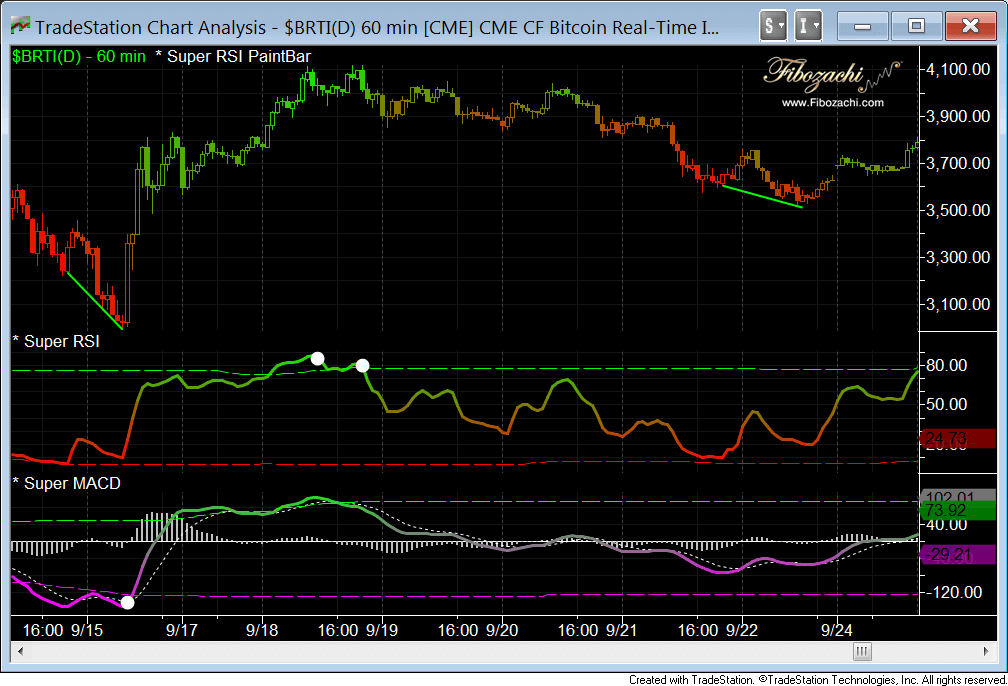 Similar in technical profile to Semis (SMH), BKX’s daily chart shows a Super RSI and Super Stochastics that are both above their Dynamic OverBought Levels. Coupled with the first flash of a daily sell signal since the 99.77 swing high of 3/1, we would be very leery of getting too far out over our Nasdaq Bank Index’ skis if long BKX here.

while price action may very well push yet a touch higher (c. 101-103), BKX bulls should remain on high alert with respect to the unfilled gap at 97.27; and, if BKX closes anywhere under 96, then their focus ought immediately shift to the Bank Index’ baby gap at 93.81. 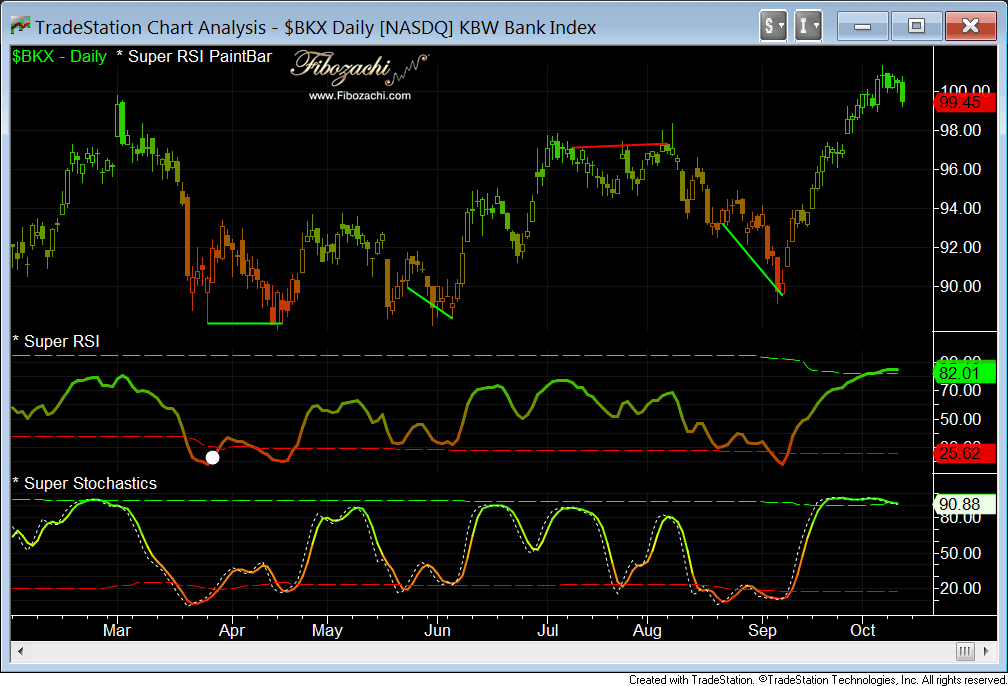 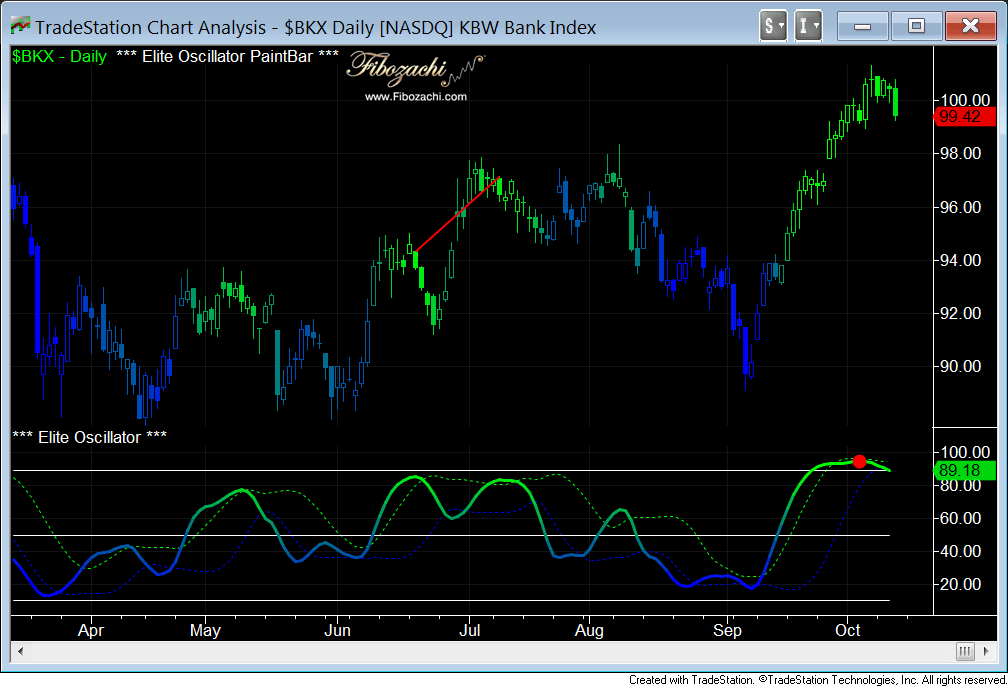