Why the US Dollar is About to Go Up, and the Euro Isn’t.

After 8-months of persistent decline ~ -11.75%, the US Dollar ($DXY) appears poised for a strong technical bounce across daily, weekly and monthly timeframes.

That’s where the Dollar ($DXY) closed the month of August.

The Dollar’s been hammered for 8-months straight.

Yeah, it bounced in February - c’mon.

After an 8-month high-to-low time cycle that shaved off 11.75% (peak-to-trough), the US Dollar appears poised to find its footing and bounce markedly from acluster of strong price support spanning 92.62 - 91.92 (note $DXY price action and weekly candlesticks across the last few weekly bars of 2014 and first few of 2015 ~ extremely strong support range from massive technical breakout).

Immediate Technical Outlook for the US Dollar ($DXY)

~ why it wants higher from here

The combination of a strong 8-month selloff – that ends in a picture-perfect doji, 1 penny above the first major support level going back to 2015 – suggests that a strong bounce is more than likely to develop over the next few months, with 95/96 $DXY the likely target (round number 100 is a longer-term possibility and a floor to absolutely trampoline through 103 if Big Lil’ Kim launches an EMP that ‘fails’ over Hokkaido/ Sakhalin.

The daily chart below shows the US Dollar with the Super RSI, Super MACD, and Super DMI – it’s worth noting that all four of these technical indicators are showing a clear-cut bullish divergence. This is because every indicator is registering a higher value even though the price of $DXY printed a new swing low. 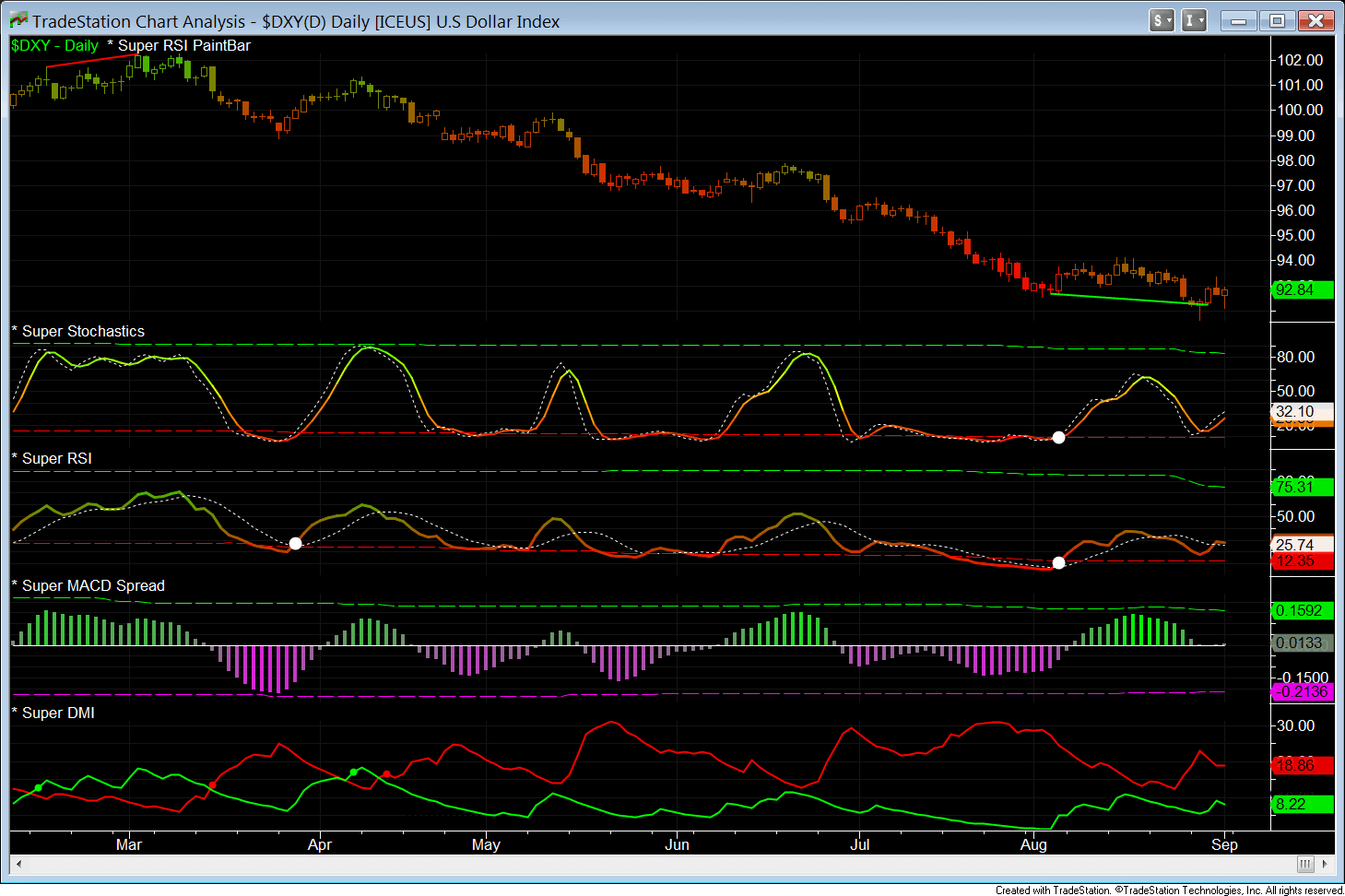 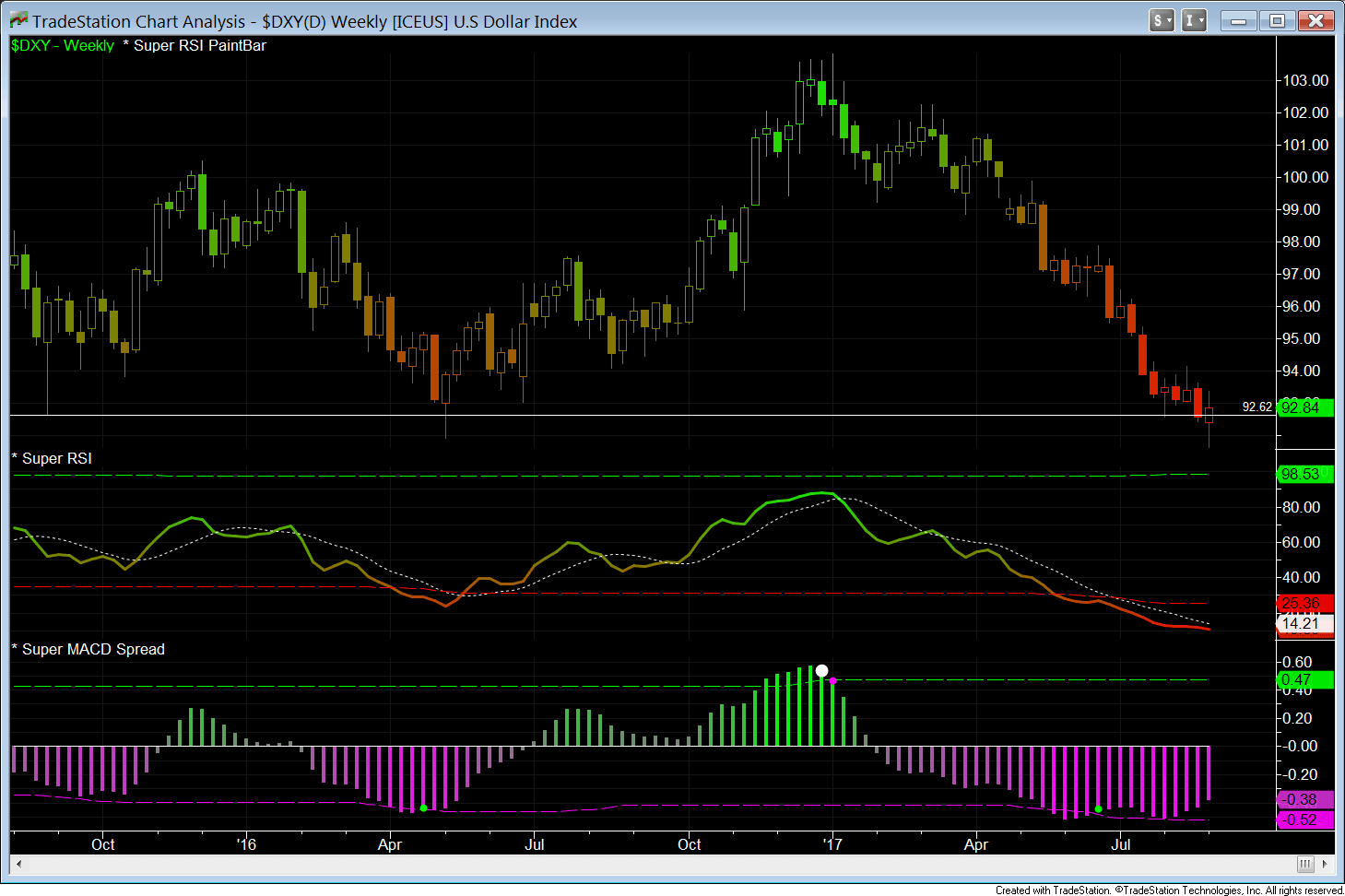 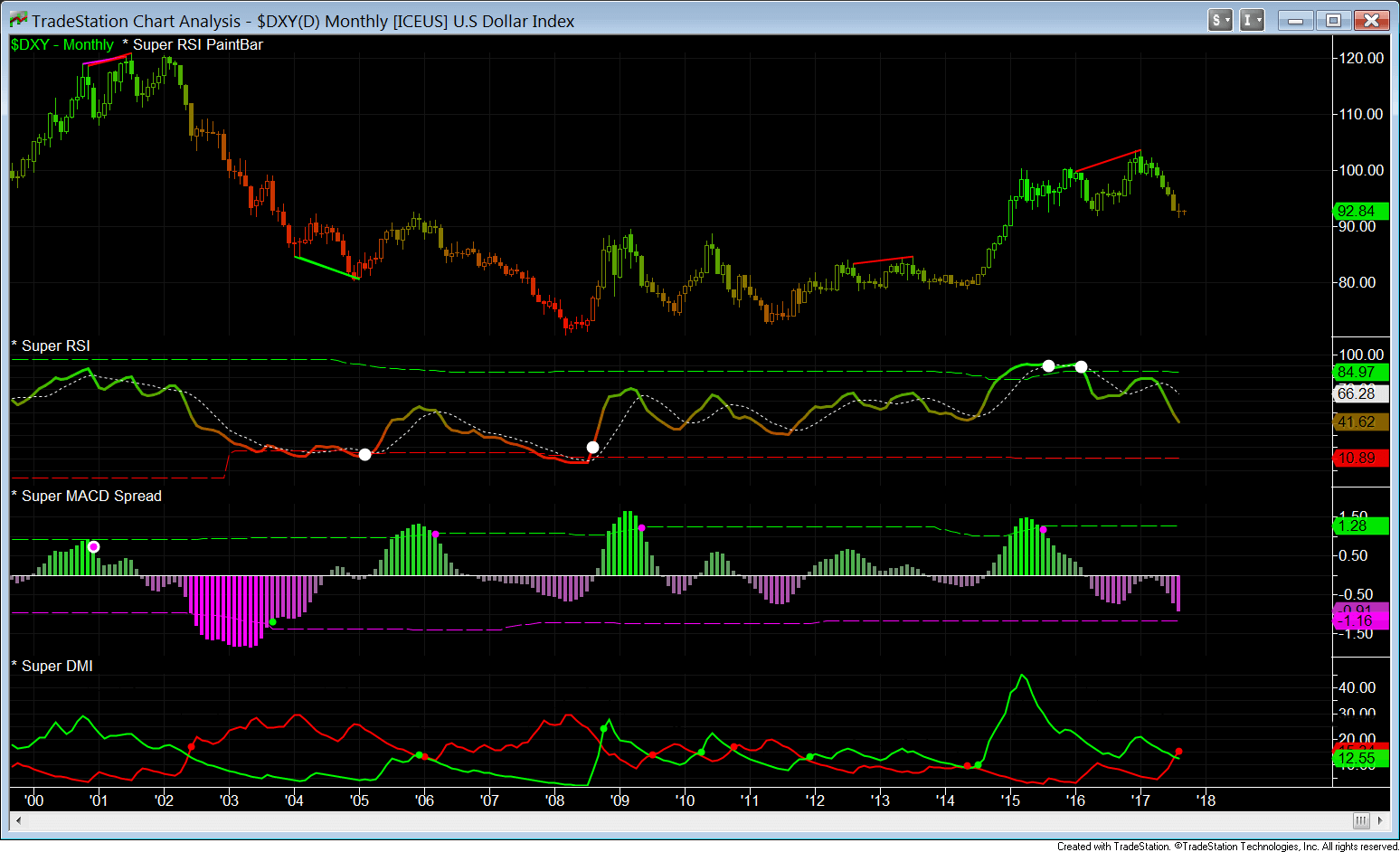 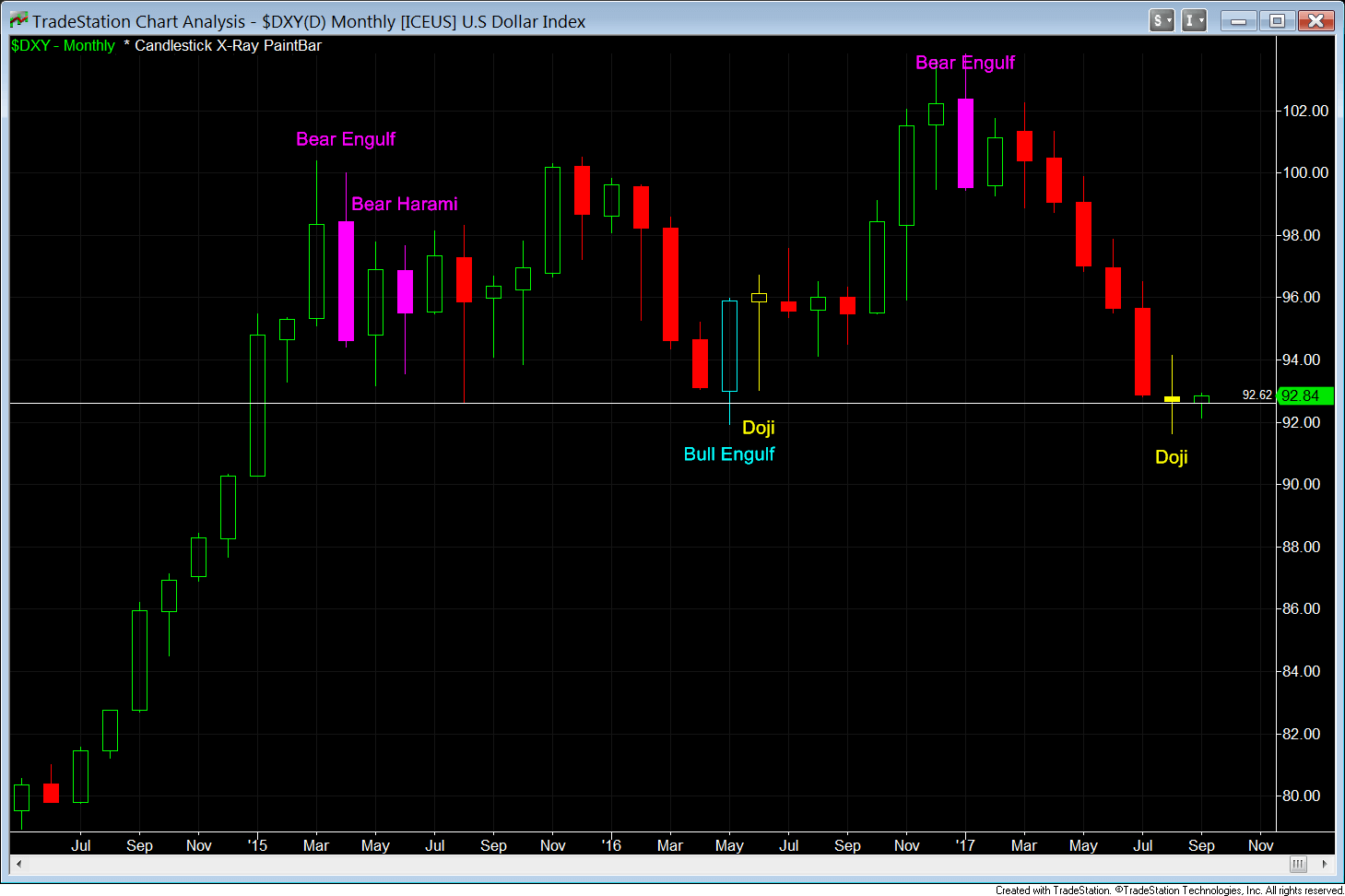 … over the last 8-months ~ the timespan when the USD registered it’s last major swing high.

Over this period of time, the USD has been the weakest currency when we tally the total amount of pips lost since January 1st.

what may prove itself the best currency pair trade, from the perspective of technical risk:reward?

EUR has been the strongest performing major currency (represented via Cyan below) but appears ready to cool-off, lose its lust for the luster of 1.20 and turn south (after explicitly failing to plot a new swing high). 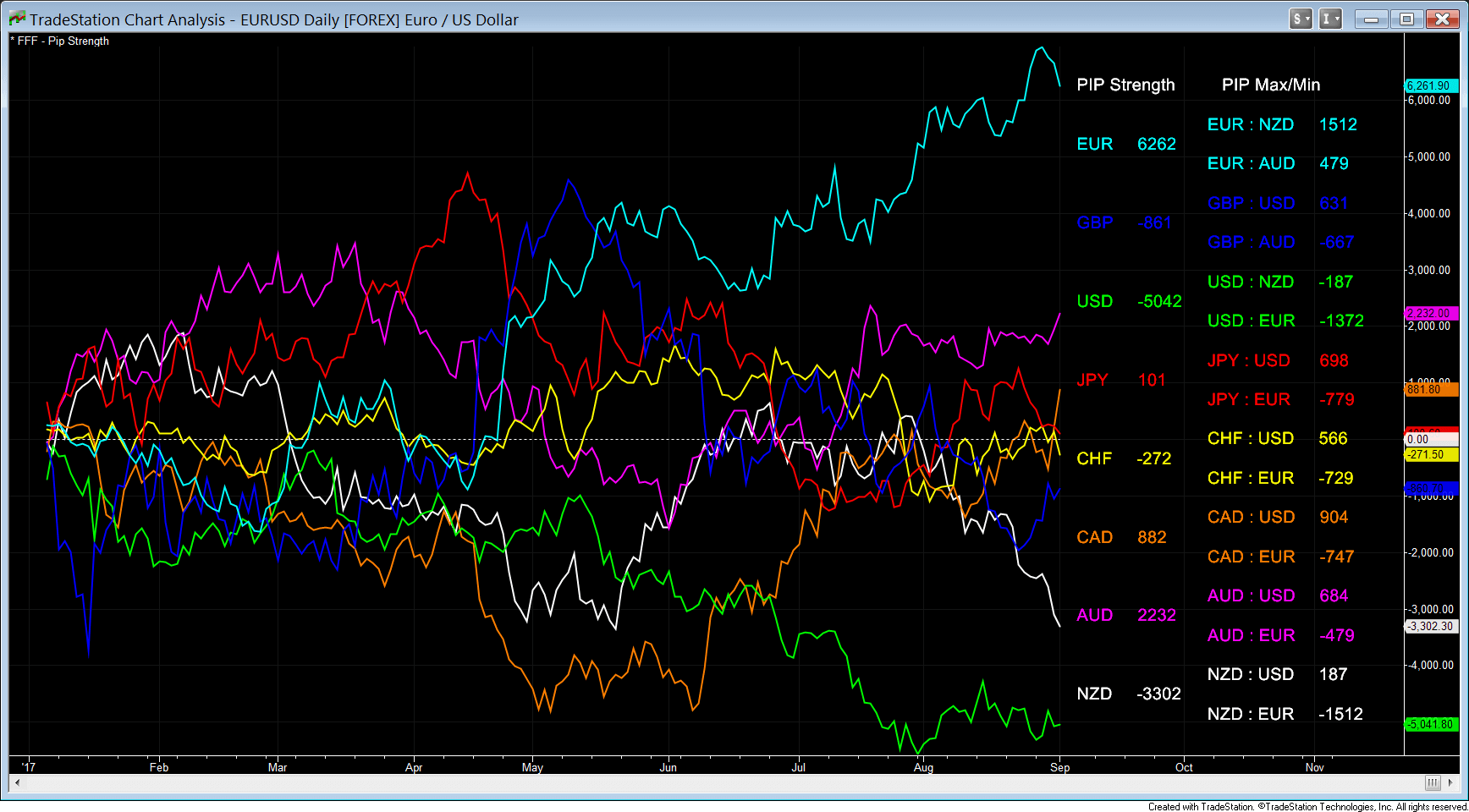 i) Looking at a EURUSD monthly chart shows that the open gap from January 2015 has just been filled (to within roughly 20 pips), and

ii) While the 1.2100 level has provided rock-solid support on numerous occasions, we’re now on the other side of it ..

iii) Meaning that same level will likely serve as resistance now – because price is approaching it from below instead of above. 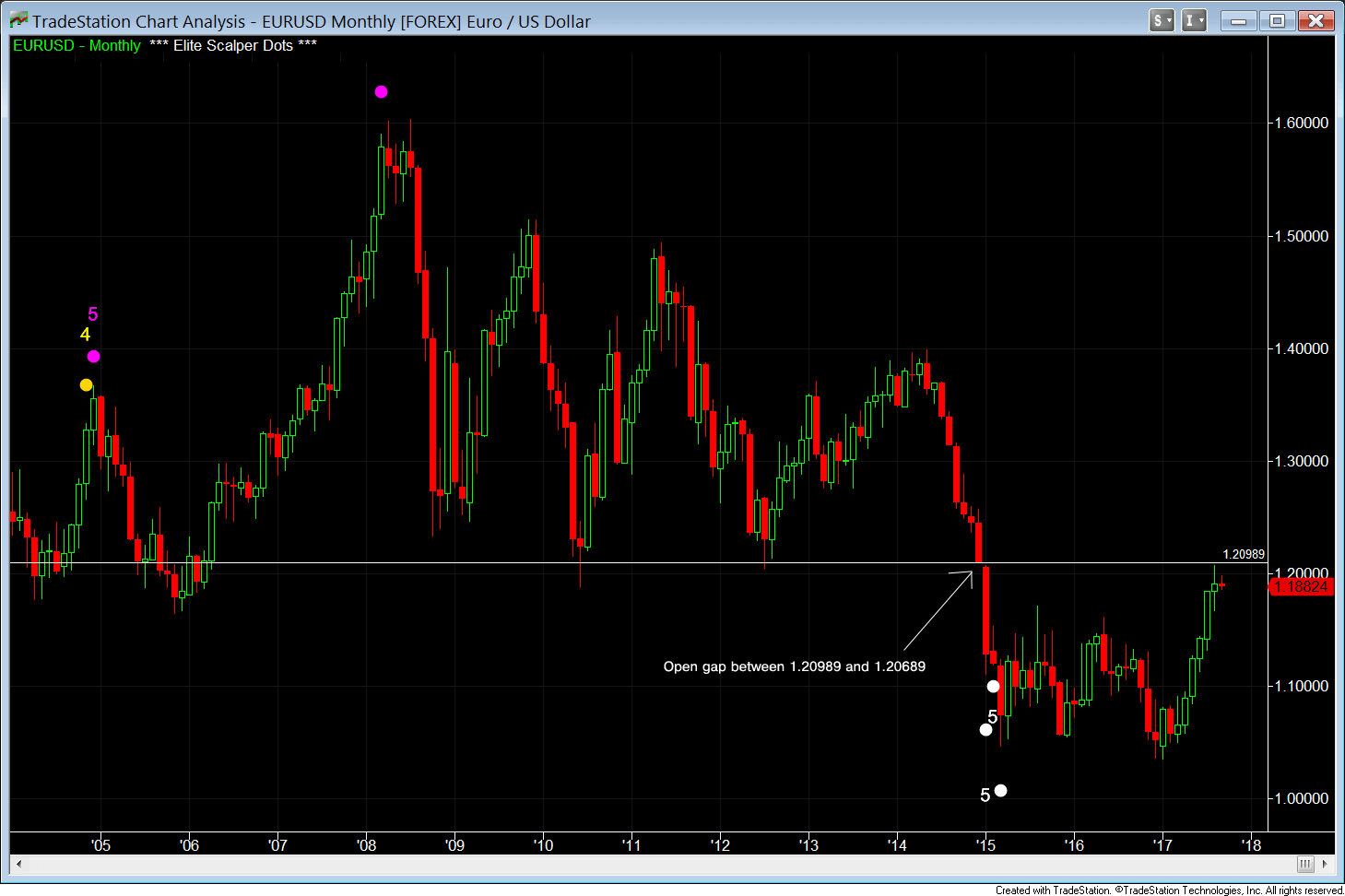