Not satisfied with your Indicators? No problem! You can exchange your Indicator Package for another of equal or lesser value — up to 30 days after purchase! 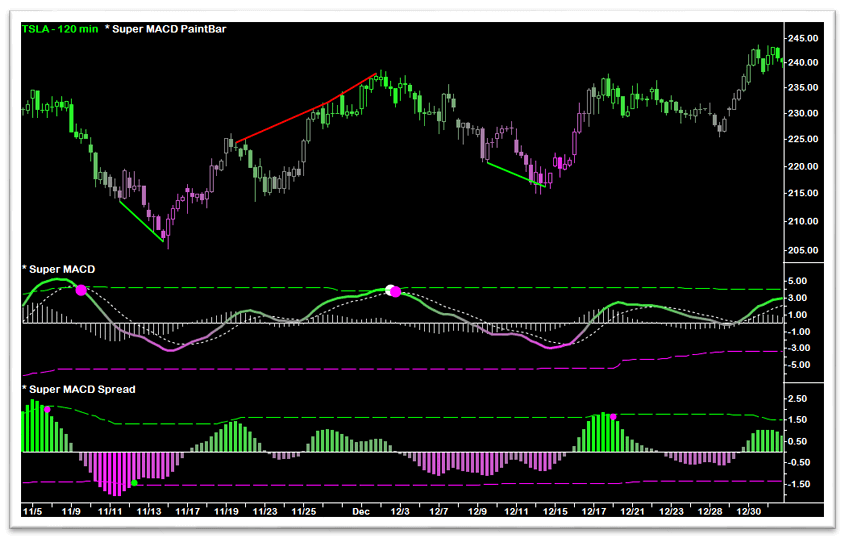 Still Using the Old MACD?
It's Time for an Upgrade.

The MACD Indicator (Moving Average Convergence-Divergence) is one of the most popular technical indicators used by novice and professional traders alike.  It does have one major problem though — the regular version of the MACD hasn't been updated or improved upon since it was first created back in 1979!

Though the MACD used to be a great trading indicator, the lack of any updates has made it less effective in today’s dynamic, fast-paced markets.  As markets evolve, the technical indicators that we rely on to trade successfully must also evolve.  Our Super MACD™ Indicator Package overcomes the limitations of the old MACD and offers several powerful new features — making it more effective than ever before!

The Super MACD™ includes a special “Divergence Engine” unlike anything you have seen before.  It is trader-friendly, easy to use, and offers many advanced features, settings, and customizations — making it ideal for both novice and professional traders.

Our Divergence Engine issues standard divergences, “Filtered Divergences” and 3-Point Divergences!  There are also customizable audio, visual, and email alerts to alert you to each divergence signal!

The Super MACD™ utilizes an innovative and proprietary new feature called DOBOS™, which stands for “Dynamic OverBought/OverSold Levels”.  Instead of relying on fixed or static OB/OS Levels like "80" and "20", DOBOS™ automatically adjusts after each bar — keeping you in perfect harmony with price at all times.  This is a significantly more accurate and effective method of determining the OverBought and OverSold Levels of an Indicator.  Furthermore, the DOBOS™ Reversal Signals are some of the most powerful and accurate of all signals.

Use any averaging method when calculating the RSI — choose between the SMA, EMA, DEMA, TEMA, WMA, TMA, HMA, or GMA!

The original MACD only takes the previous closing price into account.  The Super MACD™ gives you the option to use the (OHLC / 4) of each bar instead of the closing price — allowing all available price information to be included in the calculation of the RSI value.

The Super MACD™ has optional “Bollinger Bands” that are based on the values of the MACD instead of price — giving you access to an enhanced and unique perspective of the MACD!

You can easily activate or deactivate each of the various to prevent being distracted by signals that you aren’t trading. 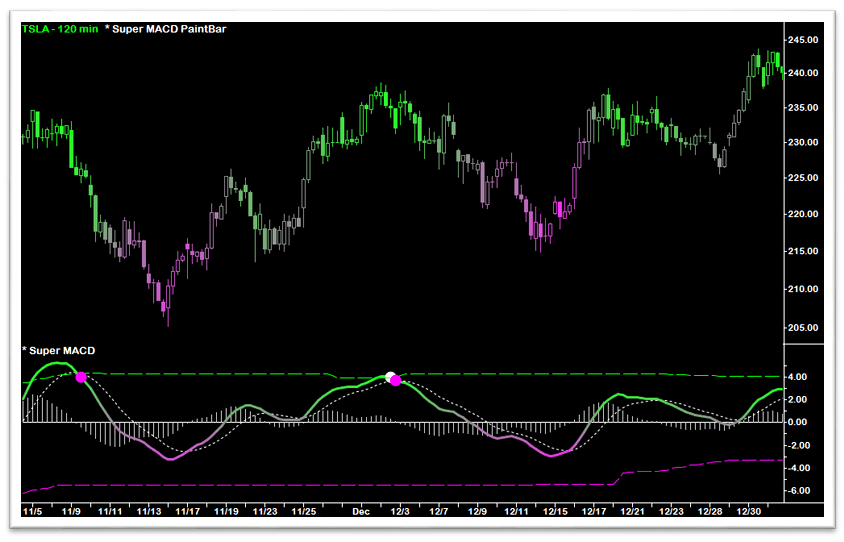 The Super MACD™ Indicator is packed with a wide variety of new features and customization options.  It lets you choose from several different methods of smoothing and color-coding, while also providing the option to show various signals and issue customizable alerts.  We've gone to great lengths to harness the full potential of the MACD Indicator by not only improving its formula and algorithm, but also by giving you more control and flexibility over its appearance and functionality. 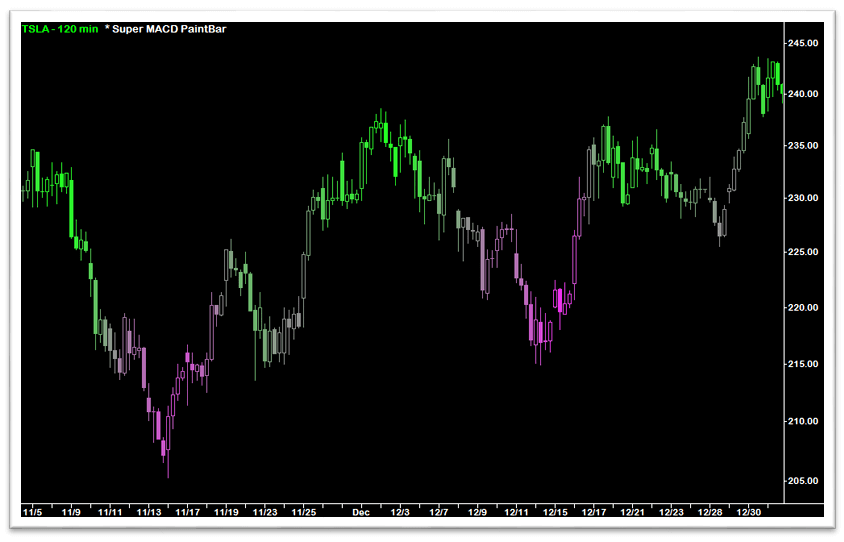 The Super MACD™ PaintBar is a visual aid that lets you monitor the MACD trend conditions directly from the chart or price panel.  Rather than only color-coding the bars based on whether or not the Super MACD™ is above or below its own average — you can choose between numerous color-coding techniques.  It even includes a special gradient option that is based on where the MACD value is in relation to its highest and lowest values over the previous “X” bars! 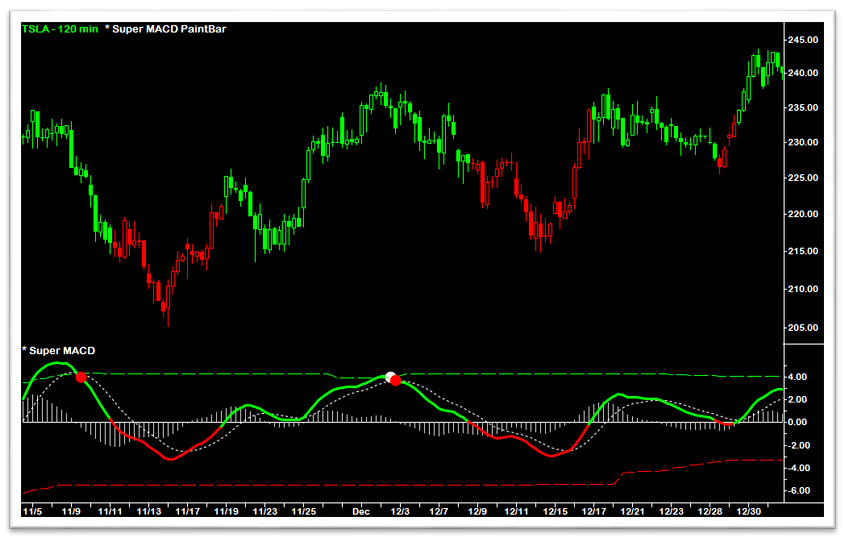 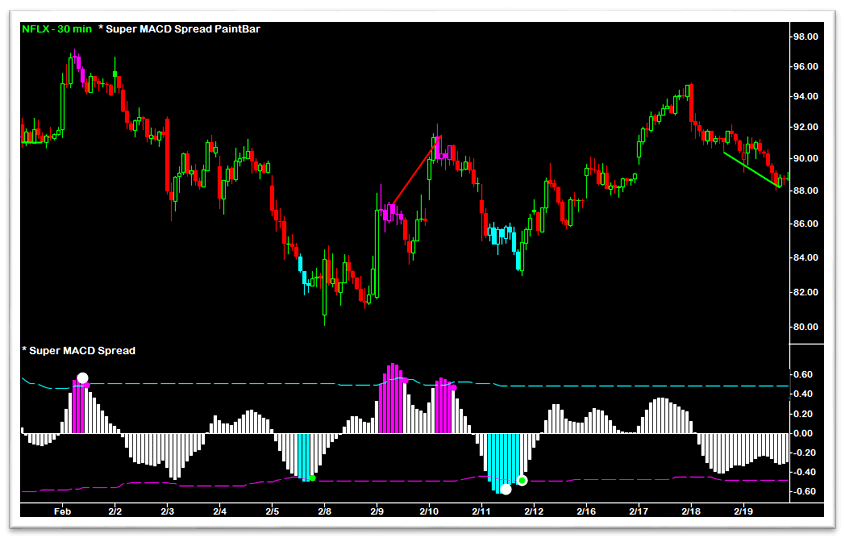 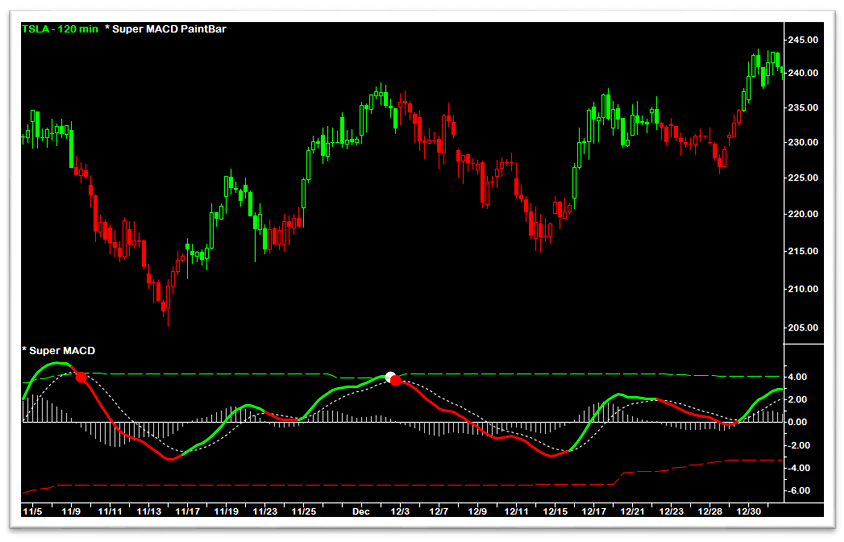 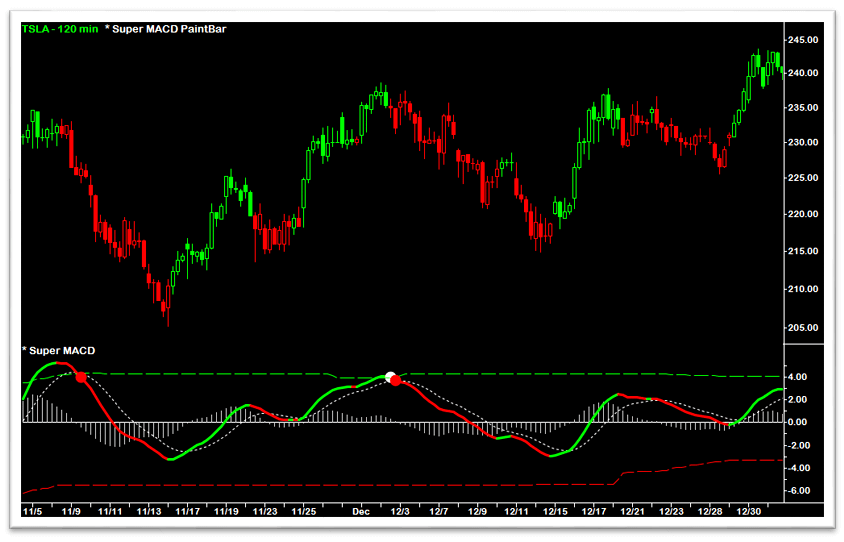 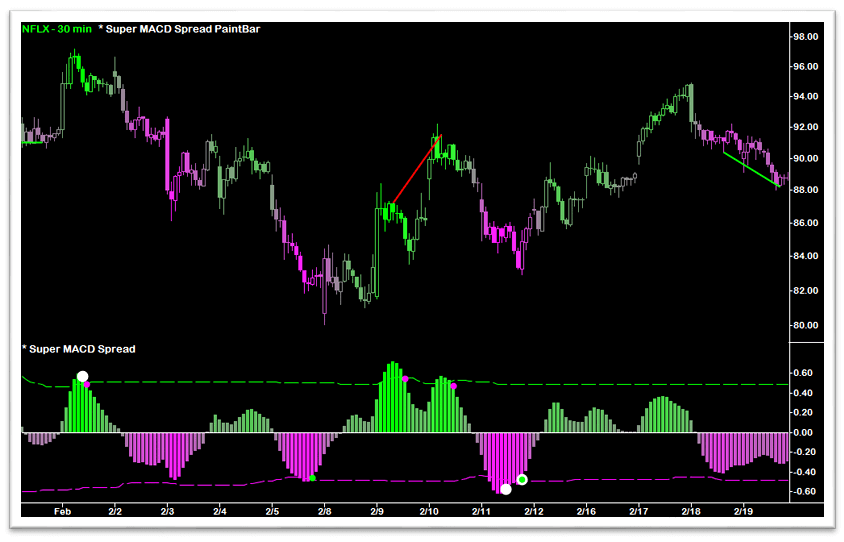 The Super MACD™ Spread plots the difference between the Super MACD™ and its own average, a value commonly known as the "MACD Differential".  Many traders only pay attention to whether or not the MACD is above or below its own average, however, we at Fibozachi have observed that focusing on the value and slope of the ‘spread’ can be extremely beneficial to one’s chart analysis & market timing. 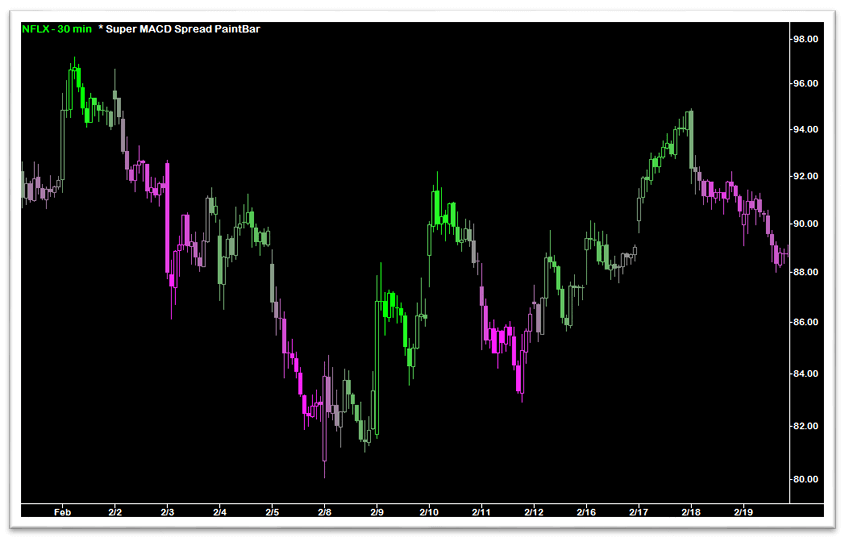 The Super MACD™ Spread PaintBar is a visual aid that lets you monitor the MACD Spread conditions directly from the chart or price panel.  Using the “Spread” value instead of the “Super MACD” value offers an alternate perspective of the trend that responds quicker to movements in price.

Similar to the Super MACD™ PaintBar, it contains numerous color-coding techniques that are based on a wide variety of trend conditions.  And it also includes a special gradient option that is based on where the MACD Spread value is in relation to its highest and lowest values over the previous “X” bars! 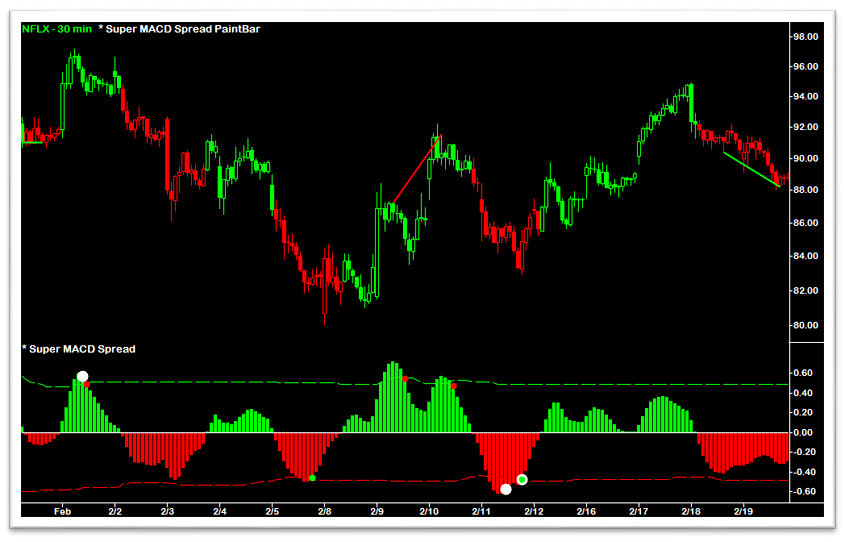 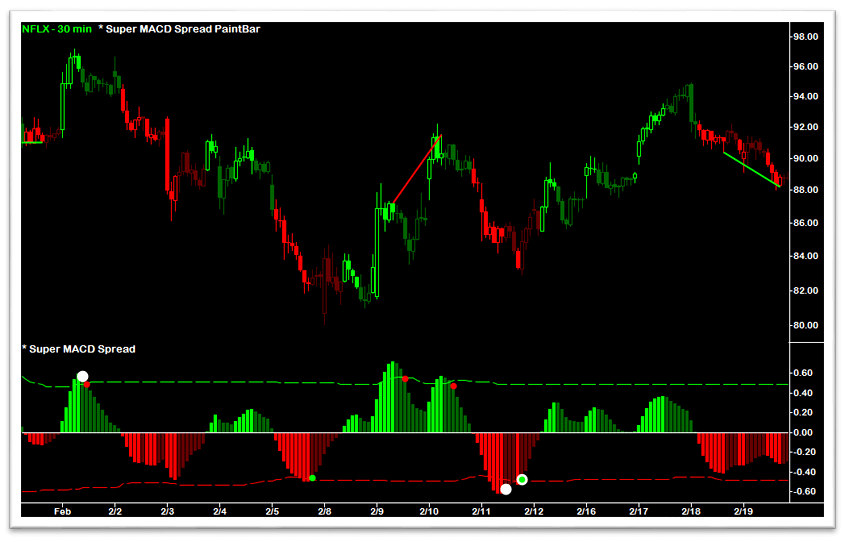 The Super MACD™ Spread includes our state-of-the-art “Divergence Engine”, which automatically detects bullish and bearish divergences between the Indicator and Price.  When a valid divergence is detected, the Super MACD™ Spread automatically draws a divergence trendline directly onto the chart — alerting you to the increased likelihood of a price reversal.  It also includes fully customizable audio and visual alerts to ensure you won't miss any divergence signals.  Our Divergence Engine is truly the most effective and customizable tool of its kind!

* These proprietary features and capabilities are exclusive to our Divergence Engine — you won't find them anywhere else! 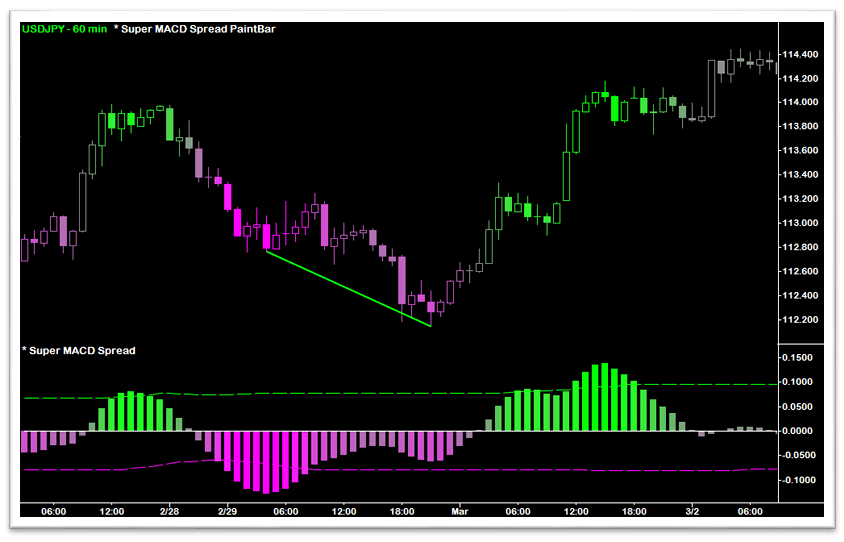 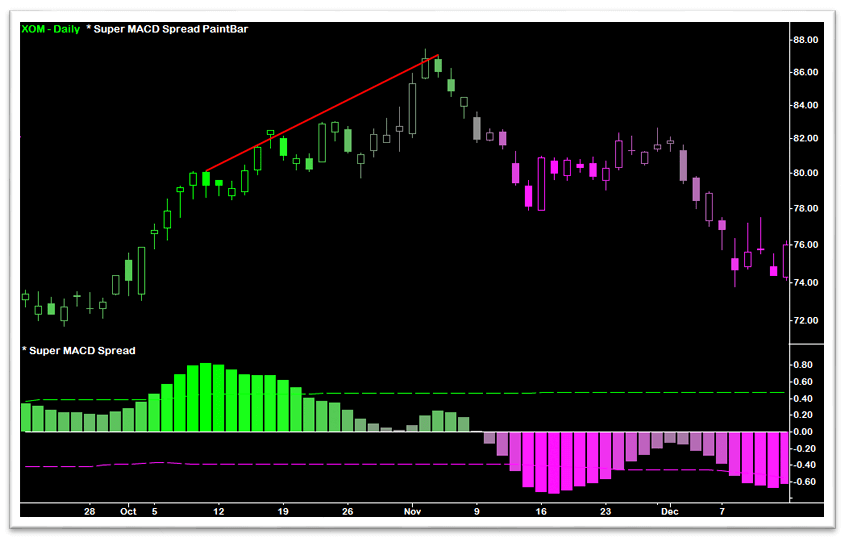 As you can see in the screenshots below, using Super MACD™ with the NinjaTrader Market Analyzer, TradeStation RadarScreen, or MultiCharts Market Scanner allows you to scan for RSI signals across any list of symbols — in just seconds! 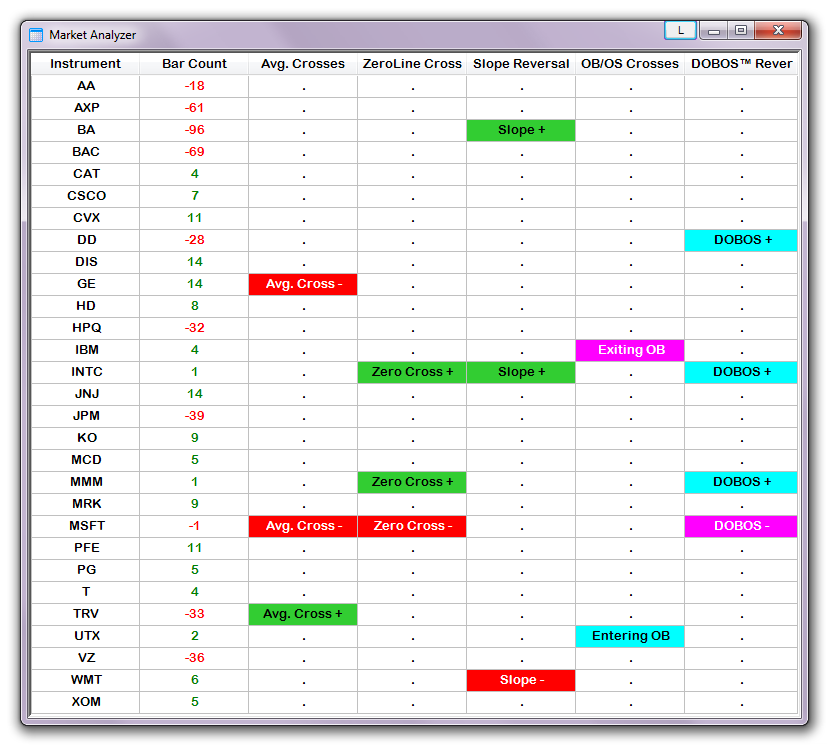 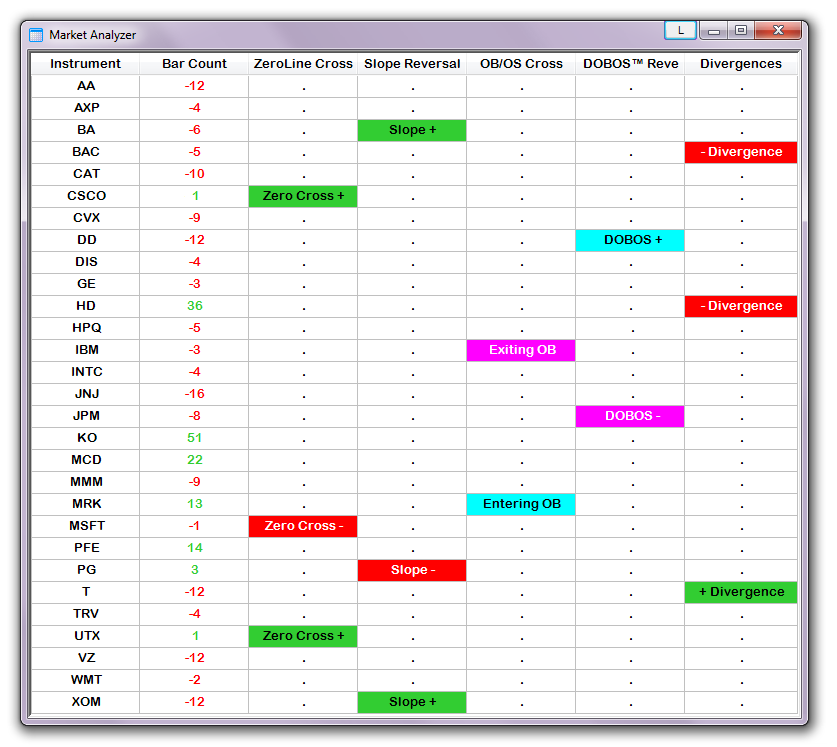 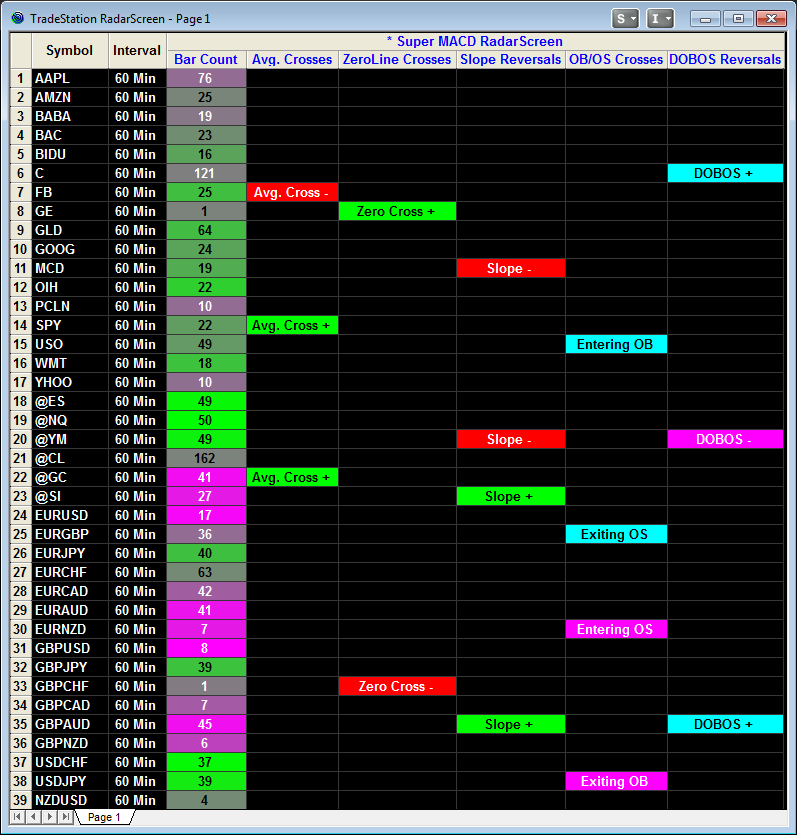 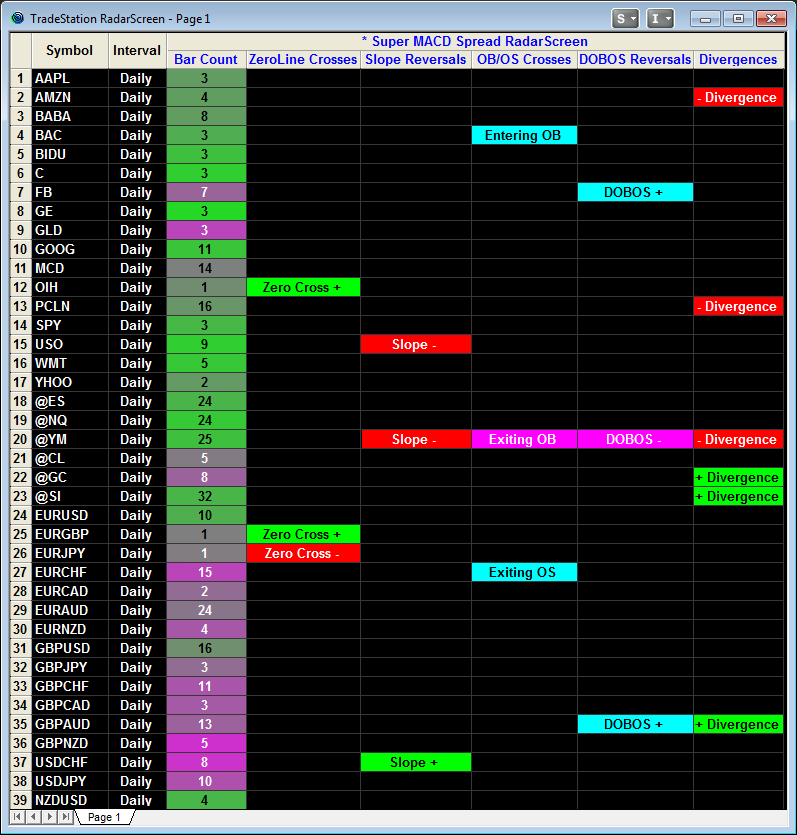 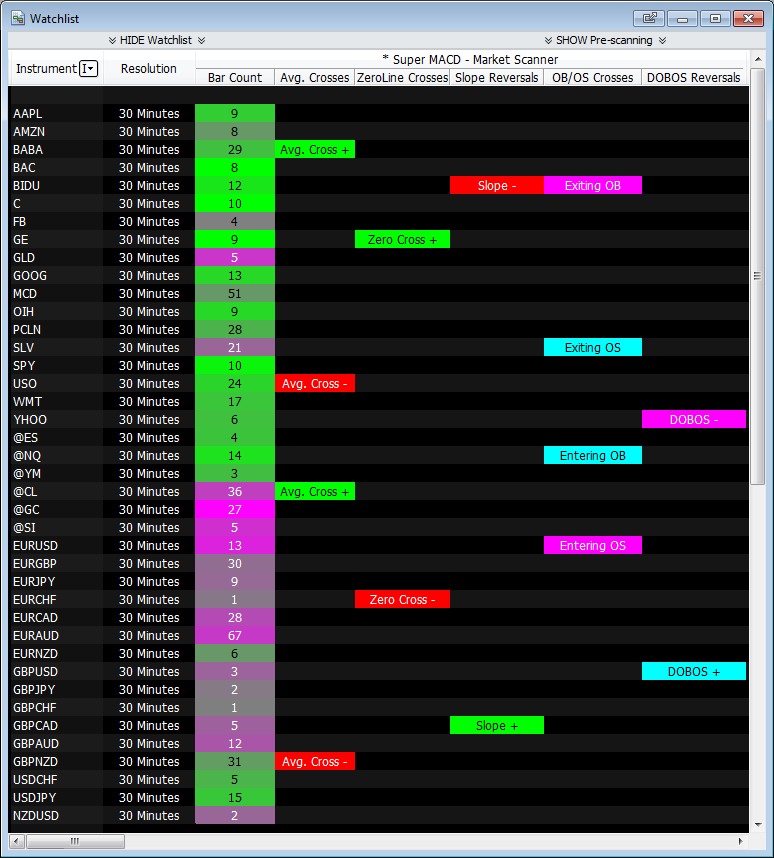 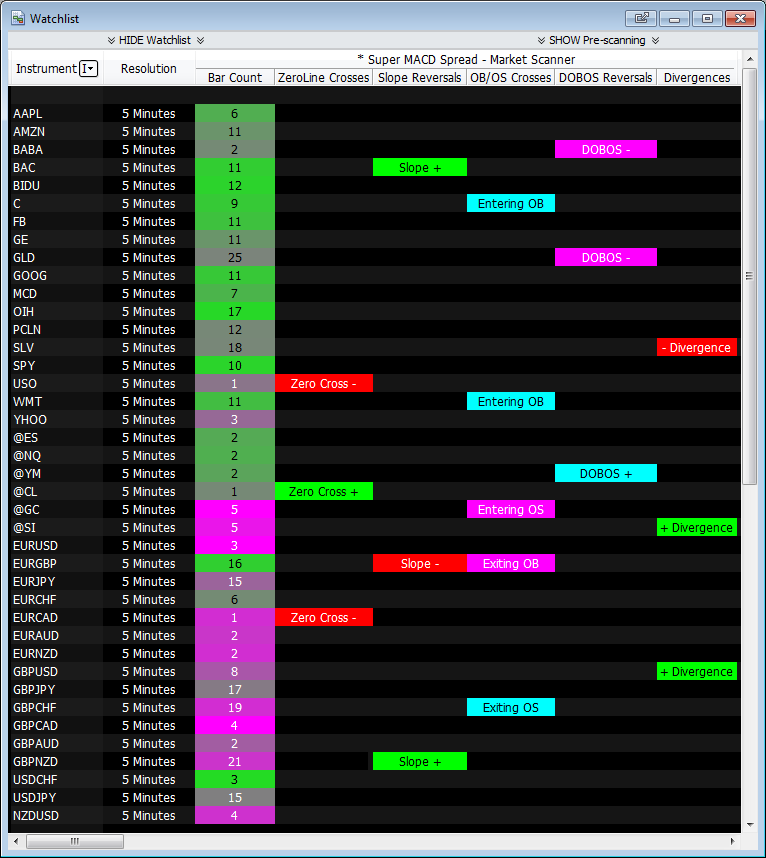 Not satisfied with your Indicators?  No problem!

You can exchange your Indicator Package for another of equal or lesser value — up to 30 days after purchase!

Have a question about the Super MACD™ Indicator Package?

We take great pride in our customer support and are happy to help our fellow traders!

Check out the Super MACD™ User Guide to learn more!

(Click the Image Below to View the User Guide)

Check out the Super MACD™ User Guide to learn more!

(Click the Image Below to View the User Guide)